“The grand old dame of Singapore has seen many a famous visitor in her time, from Somerset Maugham to Michael Jackson. It’s a beautiful place of white colonial architecture, lush pockets of green, and historic bars.”

“In late 1991 Raffles reopened as the republic’s most expensive hotel and is now a glistening showpiece, especially from the outside; inside, antique furniture blends with modern conveniences.”

Featured as Fodor’s Choice in Singapore.

“Singapore’s grand dame recently emerged from a two-year facelift. She’s looking sharper and spiffier than before, while still retaining the colonial-era splendour that she’s known for. The 1887 property is one of the city-state’s most historic and iconic, as it’s named after Sir Stamford Raffles, founder of Singapore.”

The Raffles Hotel is a colonial-style luxury hotel that offers comfort and satisfaction to visitors in Singapore. Established in 1887, it was named after the founder of Singapore, Thomas Stamford Raffles. The hotel has seen several renovations that have made it an architectural beauty.

Currently in a three-phase restoration program that has seen it close for some months now. The hotel will be reopened in the second half of 2018 which will see it even offer more quality to tourists and travelers in Singapore.

The hotel is the ideal place for visitors in the city looking for excitement and adventure while its proximity to several major transport stations makes it the perfect resting place for tourists.

The Raffles Hotel has a popular shopping arcade with about 40 specialty boutiques. This arcade offers guests several shopping options at a short distance while the hotel’s restaurants are housed in this arcade.

The hotel has a total of 8 restaurants serving a wide variety of local, continental and international cuisines in a stylish setting.

The Raffles Hotel rooms are fitted with standard amenities such as free Wi-Fi for high-speed internet access, a flat-screen TV with satellite channels, a minibar, a desk, air conditioning, a lush bed for good night rest and a comfy sofa. 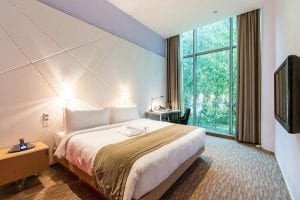 “Funky, compact Klapstar is the antithesis of Singapore’s big brand hotels. Klapstar has just 17 rooms, but it might be the most interesting accommodations in Singapore. Everything about this boutique property has been ingeniously thought out.”

“Spread out and framed in lots of cooling green foliage and colorful splashes of bougainvillea, the hotel is a favorite for heads of states and anyone who appreciates its gorgeous high-ceilinged lobby, old-world grace, many good restaurants, and extensive amenities.”

“The art-filled Vagabond Club, with its own “whiskey library,” offers 41 intimate rooms in the heart of Little India and Kampong Glam.”

“The romanticism of the British colonial era lives on at the six-star Capella Singapore resort designed by Lord Norman Foster. Sprawling 30 acres, the 112-room property lives up to its luxe reputation with extras like a personal butler per guest, a three-tiered swimming pool overlooking the South China Sea.”